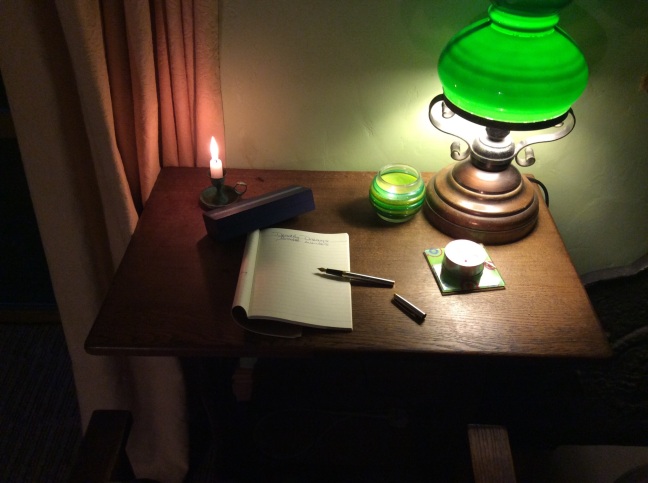 Earlier this year I decided that I needed a couple of days away just to concentrate on my novel. Usually when I go on writing holidays it’s because I want to write but also want to have other people to socialise with. I like the balance between being productive and being sociable that writers retreats usually give. However, on this occasion I booked with Annie knowing that it would be a solo experience. I was struggling with the plot for Deadly Dreams and needed to just get away and have space to think. 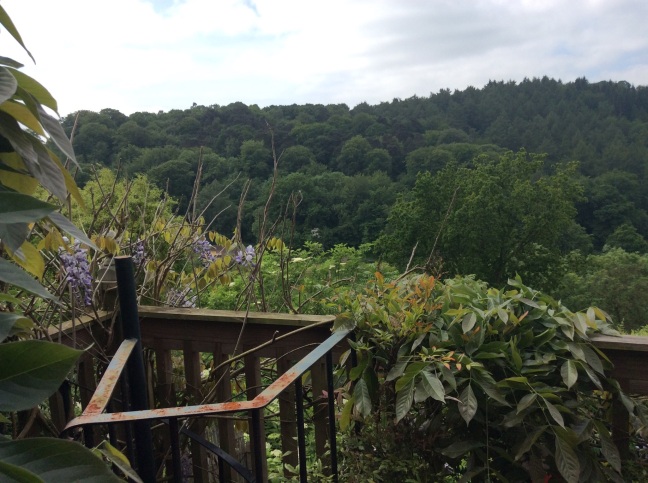 I took the train to Lydney and Annie met me there. For no extra charge, she drove me from and to the train station. Annie was really friendly and she made me feel so welcome. On the first evening I was invited to eat with Annie and her husband and they were delightful company. Every other meal after that was taken in my room. All of the food is vegetarian and I enjoyed every single meal that Annie made. There was always plenty of it and it was so healthy. 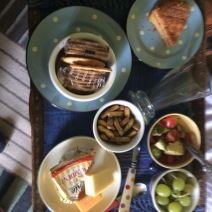 As the only guest at this retreat, you can choose what time you start your day. Annie would always ask me the night before what time I wanted breakfast and I was able to choose what I wanted to eat (for breakfast, other meals are set). Annie’s retreat is the perfect place to get away on your own. You get your own room with an ensuite shower room and balcony. It has it’s own entrance which I thought was great because it meant I could come and go as I pleased. The room is spacious and comfortable. It has a nice double bed, a desk, a wood burner, and a little library of books.

Unlike other retreats that I have been on, you literally just have your room, which suited my needs perfectly. I think I would probably struggle for longer periods because it really is a solitary experience (perfect for a couple of days, but even an introvert like me needs company after a while) and there is nowhere else in the house to go. There are, apparently, beautiful walks in the area but my fibromyalgia was flaring up pretty badly at the time so I didn’t make it far. There is also a pub close by if that is your thing. Annie was lovely enough to pick me up some things from the local shop so I had plenty of snacks, lovely meals three times a day, a beautiful view and wifi. For me this meant  there was no need to go out! I had everything I needed and was very content to alternate between my room and the balcony.

My time at the retreat was very productive. There are no distractions except for the beautiful views. You don’t have to worry about food because it’s all provided. The room is comfortable. It’s peaceful. There’s a little fridge in the room to store cold drinks and tea and coffee is provided, along with fruit and cereal bars for snacking. It certainly gave me the time and space that I needed.

I would recommend this retreat to anyone who needs some time on their own, regardless of if you are a writer. Annie was lovely and a wonderful host. It was a beautiful place to visit and the views were inspiring. I think the photos speak for themselves!

In February of this year my search for the perfect retreat for writers took me to the beautiful Casa Ana. I found it on google and was immediately drawn in by the photographs of what can only be described as paradise. Of course, I conveniently forgot about my fear of heights and ignored the fact that this beautiful house is on a mountain. Casa Ana is a 400 year old family home that Anne (the owner) has restored to it’s former grandeur. Although the house has been modernised, it has been done in keeping with the historic feel of the village. Casa Ana only runs three writers retreats per year. For the rest of the year it offers bed and breakfast accomodation, walking holidays and (new this year) cookery courses. 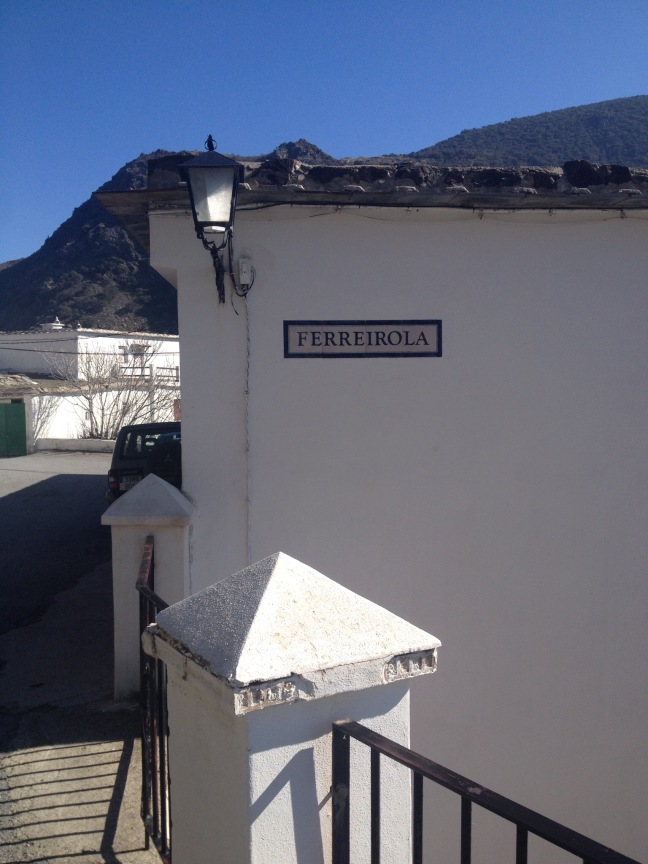 Casa Ana is located in a tiny village called Ferreirola on La Alpujarra (the southern slope of the Sierra Nevada). When I say this village is small I am not exagerating. Many of the buildings in the village are empty. I can’t remember exactly how many people live in the village but it is less than 50. This makes Ferreirola the perfect place for a writers retreat. Quiet, isolated, peaceful. You have to search far and wide for distractions!

Casa Ana is located 90 minutes from Grenada Airport and two hours from Malaga Airport. There are buses that go to nearby towns and villages but no public transport going directly to Ferreirola. Anne is able to arrange taxis for an additional cost and I booked a taxi through her.  The taxi was provided by Kitty. She met four of us at the airport and drove us up the mountain to Casa Ana. I was very grateful for her slow, careful driving when it came to the narrower roads, which also seemed to be the roads with the steepest drops.

The House
I booked the smallest room in the house so I was surprised to find myself in a spacious single bedroom with a decent sized ensuite bathroom. The room was clean and comfortably furnished. Many writing retreats do not seem to have ensuite bathrooms so I was pleased to find one that did. The ensuite consisted of a shower, toilet and sink and like the rest of the room was a good size. There was plenty of storage in the room with a wardrobe, some shelves and a cupboard in the bathroom. 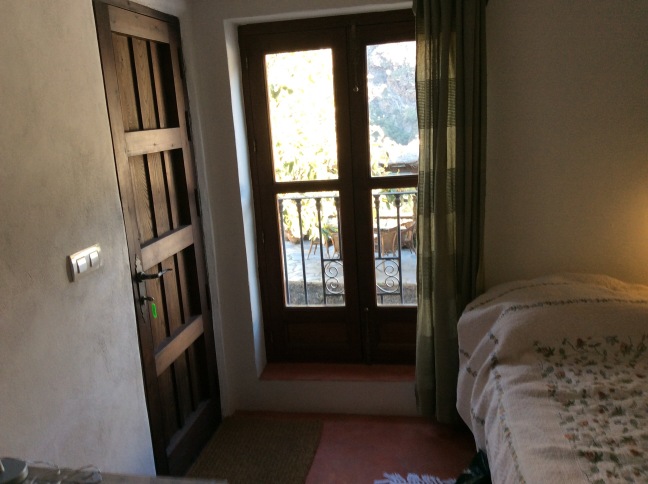 Most of the bedrooms open directly onto the courtyard and do not connect to the other rooms in the house. I loved this because it made it feel more private. Some writing retreats can feel like everyone is on top of each other but this is absolutely not the case at Casa Ana.

I don’t know why this photo is so small but this was the entrance to my bedroom.

In addition to having your own bedroom with a writing desk, there is a dining room with a big table that is good for writing on, a guest lounge and kitchen (with breath taking views) and lots of outdoor areas to write or relax. Tea and coffee is available in the guest kitchen and there is a selection of soft drinks, wines, beers and chocolate available for purchase. There is space to store food and drink in the fridge or cupboards.

The evening that we arrived at Casa Ana, Anne gathered us all in the guest lounge and we had nibbles and prosecco. This was such a lovely welcome to the retreat and it gave everyone the chance to get to know each other and to get to know Anne. Wes, Casa Ana’s chef, cooked dinner three nights each week and one of the nights was the first night. It is worth visiting Casa Ana just for the food! If I liked cooking i would definitely be booking myself onto one of his cookery courses. It was like having a michelin stared chef preparing a private dinner.

Breakfast and lunch is provided every day. Our meals were prepared mostly by Christof and I think that his cooking rivals Wes. Meals are at set times but on the few occassions that people missed meals, it was easy enough to just put some food aside for them. Breakfast and lunch are both big meals at Casa Ana and there was often food left over for us to eat in the evening.

The retreat is very well structured with set times for quiet writing time, broken up by meals. Twice per week there is the option to read your work to the group. I only took part in this once but really enjoyed it. It is completely optional and there was no pressure to join the group or read anything if you do join the group. The group that I was there with was very supportive but obviously this will depend on who else is at the retreat.

On the evenings when meals aren’t provided there is the option to walk into Mecina, a slightly bigger village with a disproportionate amount of restaurants, including a vegetarian one. The walk to Mecina terrified me. It is dark (the kind of dark that you don’t get in cities) and it is on a mountain (did I mention that I’m scared of heights?). Food there is really reasonably priced (you can eat for 5 euros) and you will receive a warm welcome at whatever restaurant you choose. When I go on retreat I prefer to stay in the retreat and not go out for something to eat (although I did really enjoy my trips into Mecina) and in the future I would be better prepared and bring more food with me. There is plenty of space to store food and there is access to cooking facilities on the nights that Wes doesn’t cook so it is possible to remain at Casa Ana and eat there. There is a supermarket but it is about an hours walk (I didn’t go there so this is based on what other people told me). Taxis can also be booked.

You can have laundry done once per week during your visit. The room is cleaned three times during the two week stay. There is an accessible room available. If anyone has dietary needs these can be catered for.

My two weeks at Casa Ana were incredibly productive. I completed the second draft of my novel and wrote a short story while I was there. I made some great friends and met some inspirational writers.

Rooms cost from £300 per week for a two week stay. This includes breakfast and lunch.

This is probably the best value writers retreat that I have found so far.

This is certainly a perfect retreat. If I could pick Casa Ana up and put it at sea level, it would be my perfect retreat. There is nothing (other than the height) that I didn’t love about this retreat. It was well structured, the facilties were of a high standard, the food was excellent and there was chocolate available at all times.

The next retreat is in November. Book now, places go quickly.